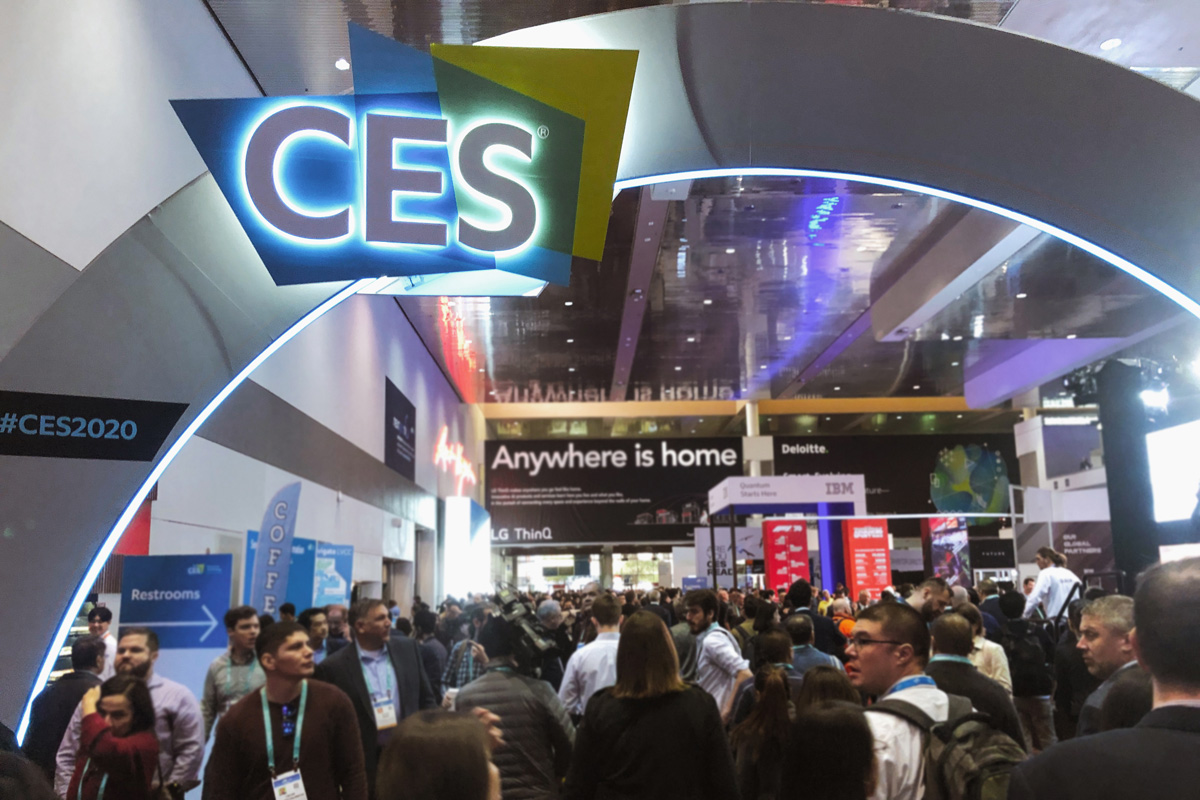 Bookmark’s Kristina Velan and Valerie Silva take us through their highlights from the 2020 Consumer Electronics Show in Las Vegas, reporting on all things air travel for APEX Media. From hyper-personalization and air taxis to AI-fuelled solutions and assistive tech, these were the major themes.

Delta CEO Ed Bastian made history as the first-ever airline CEO to deliver a keynote at the Consumer Electronics Show (CES), unboxing one announcement after another, and US government agencies, including the Transportation Security Administration (TSA) and Customs and Border Protect (CBP), had an unprecedented presence at the show, hinting that 2020 may be the year travel becomes truly tech-infused.

“Wouldn’t it be awesome to have one of our famed Delta red coats always at your side solving travel problems for you?” Bastian asked. “The next best thing is the Fly Delta app.” The Atlanta-based airline will evolve its app into a digital concierge that offers services such as facilitating baggage delivery from home to hotel and suggesting a time to leave for the airport, based on traffic and weather conditions. It will also enable virtual queuing, which launches this week. The feature notifies travelers when it’s their turn to board, like how restaurants use pagers or text messages to signal that a customer’s table is ready.

.@Delta‘s vision for how its #FlyDelta app will influence the future of travel #PaxEx #CES2020 #CES #tech pic.twitter.com/yl2vpE9eFI

Delta is also working with Redmond, Seattle-based startup Misapplied Sciences to bring parallel reality to Detroit Metropolitan Airport (DTW) this summer. The technology allows a screen to simultaneously display different information to each person looking at it. We had to see it to believe it – the demo echoed scenes from “Minority Report.”

Misapplied Sciences is demonstrating its #ParallelReality tech at @delta’s #CES2020 booth this week. Will launch for first time ever at Detroit airport this summer #paxEx #CES @MisAppSci pic.twitter.com/CNRszV1dhM

Machines have been easing personal mobility since the wheel was invented. One such innovation was at CES, in the form of a motorized carry-on. Instead of lugging their suitcase around, Modobag owners can ride their luggage, which accommodates oversize humans (Shaquille O’Neal gave one a spin at the event).

From an @theAPEXassoc @FutureTravelX perspective, nice to see @SHAQ demonstrating the latest in in-flight roll-aboard luggage with a safe landing at #CES2020 !!! pic.twitter.com/VxmfnxwILp

Airline employees could benefit from a mechanical boost, too. Delta was offering demos of a wearable robotic exoskeleton that could enable a baggage handler to lift up to 200 pounds repeatedly for up to eight hours.

Cyborg for a second and loving it! Thank you @Delta for giving me that #exoskeleton strength today as @theAPEXassoc takes on #CES2020 💪 pic.twitter.com/vNJM6CsIxc

When Service Borders on Surveillance

More than a dozen panels addressing privacy and surveillance concerns were held at this year’s event (in one, Facebook and Apple sat alongside each other defending their data collection practices), and yet the show floor was replete with devices that would only make it easier to get up close and personal.

Among them were Gentex’s iris scanning technology, which could be used to identify passengers at their seat for a personalized in-flight entertainment experience, and biometric exit facial recognition solution from the US Department of Homeland Security. At the start of the event, the TSA released a statement seeking industry feedback on technologies for self-screening in airports: “In a similar fashion to self-checkout at grocery stores, self-tagging checked baggage, or ATM machines, many patrons prefer an experience that they can complete without assistance and at their own pace,” the statement reads.

.@theAPEXassoc gets a demo of the #biometric #FacialRecognition tech on display at the @DHSgov booth in #SmartCities expo at #CES2020. Currently being tested at @ATLairport with @CBP and @TSA pic.twitter.com/KNmxGveCFo

Speaking on a panel about smart tourism, Dr. Joe Leader, CEO of the Airline Passenger Experience Association, discussed the double-edged sword of biometric-based hyper-personalized service. “You should own your identity,” he said. “The only reason an airline or any travel provider should be using your identity is in genuine service to you.”

This year, there were at least two full-scale air taxi mockups on the show floor. Hyundai revealed its S-A1 concept for the first time and the Bell Nexus was back for the third year in a row.

Uber has been promising flying cars by the middle of this decade, and its partnership with Hyundai is propelling the goal of affordable urban air travel. “We believe Hyundai has the potential to build Uber Air vehicles at rates unseen in the current aerospace industry, producing high-quality, reliable aircraft at high volumes to drive down passenger costs per trip,” said Eric Allison, head of Uber Elevate, at a pre-CES press conference.

Service providers like Uber and manufacturers like Bell and Hyundai will have to work alongside infrastructure designers and government agencies before urban air mobility takes off. Bringing it to fruition will require cooperation between many stakeholders, as evidenced by the breadth of speakers on this panel.

Planting the Seed: Tech for a Good Cause

CES has been widely criticized for being out of touch, promoting the relentless pursuit of the next best thing over that which would actually be best for users and the planet. But this year, peppered among the tech-for-tech’s-sake innovations, were many that aim to improve people’s lives and make the world a better place.

OrCam has spent the last decade looking at how artificial intelligence could be packaged into discrete wearable assistive technology for individuals with disabilities. At this year’s show, it showcased a device that can help isolate a speaker’s voice in a loud public space, as well as a lightweight eyeglass attachment that uses computer vision to identify products and read printed text aloud, from any surface, in real time. While the company doesn’t have any products designed specifically for the travel context, the airport environment, with its many signs and sounds, is among the most stressful for individuals with vision and hearing impairments.

Meanwhile, ClimateSeed, a startup that’s developed a digital platform amassing certified sustainability projects, says it can help the airline industry reckon with its complicity in climate change, by helping stakeholders move beyond carbon reduction and offsetting. “Right now, there are thousands of projects around the world but no centralized platform to find ones that are high-quality,” said Michelle Parra-Guedez, the company’s global relationship manager. “Airlines need to go outside of the carbon mentality and contribute to projects that have multiple benefits for the planet, including biodiversity and social and economic goals.” 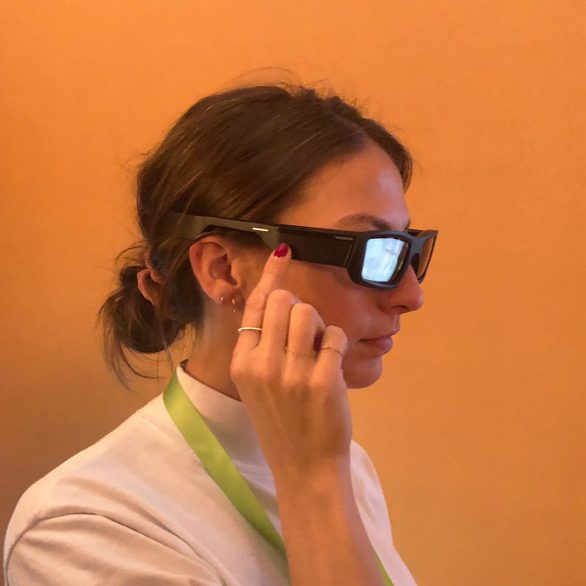 Driverless Cars, Flying Taxis and Wearable Tech: The Future According to CES 2019